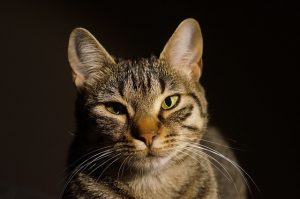 Cat’s whiskers should never be trimmed. If their whiskers are cut they feel disorientated. Cats use their whiskers to move about in the dark – our feline friends are nocturnal of course. They use these hairs to detect air currents around objects which helps them to avoid bumping into them.

Whiskers can help cats judge where each part of their limbs and body are when they’re leaping about. Did you know that each whisker has a sensory organ called a proprioceptor. The longer stiffer hairs attached are called vibrissae – these connect to the nervous and muscular systems. These hairs send information directly to the animal’s sensory nerves – think of whiskers rather like a radar.

Whiskers therefore play a key role in body language to other cats. Without them the cats would not be able to protect themselves, leap through the air and negotiate narrow spaces.

A groomer experienced in handling cats will know what to watch out for in terms of body language indicating a cat is about to attack with its teeth. I’ve never had a serious bite from a cat.

I have, however, experienced biting – especially with kittens when they are teething – but only when the cats have been in an affectionate mood. A gentle bite is a sign of love and affection. Playful bites generally won’t hurt you. The cats are showing you affection in the same way they would with their own mothers. You become, I believe, like their surrogate mum. You probably may also find that when they are in this mood they give you a lick or scratch. So take it as a compliment!

You should, however, be wary of a cat when their ears go back as this is usually a sign that they are feeling scared or defensive. It may indicate anger or aggression. They could attack you with their teeth and claws.

Rescue cats who are nervous may show these signs during their settling in period in their new home. If you would like help with grooming your nervous cat, please get in touch.