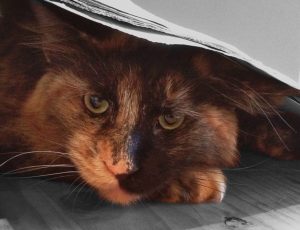 How Intelligent Is My Cat?

It’s a very good question. I can only go from anecdotal evidence – I have owned cats for years and of course groomed many hundreds.

I believe, like all creatures, that cats are more intelligent than we give them credit for. I’ve recently come across research done by Japanese scientists. They carried out memory tests and found that our feline friends have just as good memories (in certain tests) as dogs. The scientists looked at 49 domestic cats and found that the animals could remember eating their favourite snack – a key way of measuring.

Saho Takagi, a psychologist at Kyoto University, said cats as well as dogs use memories of a single past experience. This imples they have episodic memory similar to that of humans.

“Episodic memory is viewed as being related to introspective function of the mind; our study may imply a type of consciousness in cats,” she said. “An interesting speculation is that they may enjoy actively recalling memories of their experience like humans.”

The Japanese team tested the cats on their ability to remember which bowl they had already eaten out of and which remained untouched, after a 15-minute interval.

Prof Laurie Santos of Yale University said the experiment showed that cats are remembering information about where they searched before and also which areas used to have food.

“It opens the door to new studies examining how long cats’ memories can be and whether they also remember richer episodes in their own life as humans do,” she added.

So next time you take away uneaten food in a bowl, remember that your cat may have remembered what it had left to eat and might just want to come back for it!

Jan from Catskingdom is a mobile cat groomer which covers Hampton and all of Surrey and South West London. Jan is a Master Cat Groomer which is the highest qualification in the field.

If you would like Jan to groom your cat at home, please get in touch.