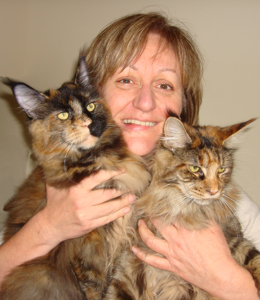 Every evening, I call out to my two cats saying: “It’s dinner time or din,dins”. You probably do the same. Sometimes Alfie and Pasha will wander over, other times they won’t.

It’s quite a different reaction with dogs – they can’t wait to gobble up all their food! To me, it seems that cats do understand the human voice but choose to ignore it. This reminds me of having teenagers!

I’ve been looking into whether cats simply just ignore humans. I’ve found that no one really  knows how much our feline friends do understand. One obvious difference to me is that with us humans we tend to vocalise our emotions, With cats, they don’t show emotion. It’s, for instance, harder to see if a cat is in pain.

People have tried training cats but have found that they are generally too independent. They were never bred to be trained and it’s not in their instinct. But, it’s possible in my experience – providing it’s something the cat actually wants such as a Dreamy or a favourite toy!

I’ve recently written about whether cats respond to their names being called which makes for interesting reading!

A study published in Animal Cognition found that 50% to 70% of the cats turned their heads at the sound. They also found that 30% moved their ears when reacting to certain familiar sounds.

“Historically speaking, cats, unlike dogs, have not been domesticated to obey humans’ orders. Rather, they seem to take the initiative in human-cat interaction,” the paper reads.

While dogs were bred over thousands of years to respond to commands, the study authors say that our feline friends cats have never needed to learn to obey human orders.

The study further notes that humans still give the same level of affection to cats as they would dogs – even if the affection is not apparently mutual.

For me, I will carry on calling Alfie and Pasha into dinner, even if they don’t really understand!